test and measure before shipping

The A / B Test is a technique used by marketing and communication teams to optimize the content of a campaign before impacting the entire user base.

The indigitall platform offers this functionality so that this process is very simple and comfortable , so that you can use this A / B test technique regularly in your day to day, and that in this way you can optimize your campaigns based on real data of user response.

The creation form is very similar to creating a normal push campaign. The difference are: 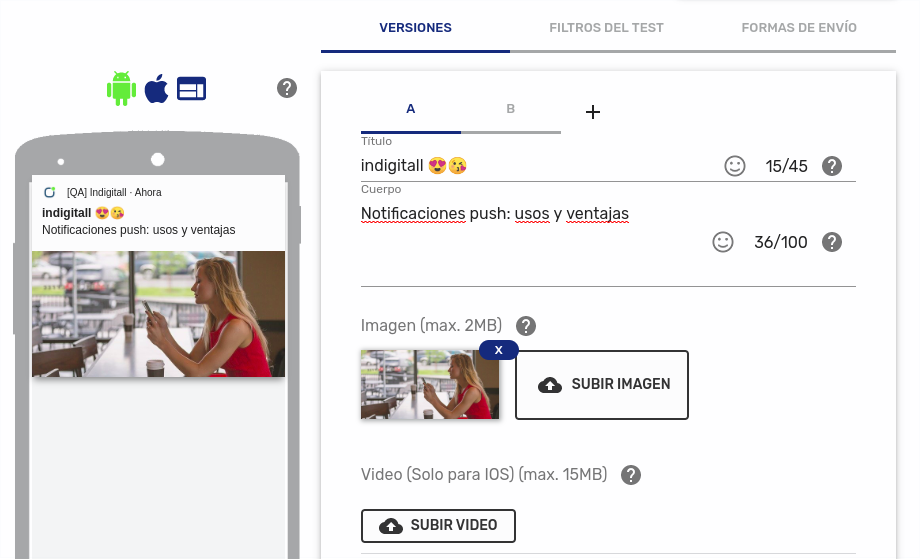 Create an A / B Test

The creation of each notification is the same as when you create a new campaign.

You can find more detailed information on how to create push campaigns at this link .

In the usage panel you will see that there are two options, A and B, although you have up to 5 options / versions C, D and E that you can use at the same time in the same campaign, just by clicking on the plus icon / symbol . To delete a version, the one you want to delete must be selected and then click on the minus symbol

During the test each device receives only one notification, regardless of the number of versions. Some users will receive notification A, others B,…, but in no case two versions of the same campaign.

Versions can be shipped via manual delivery or smart send.

With the filters you can segment to whom to send notifications in a personalized way.
Choose the country or region, if they are users who have not entered your website or app for a long time, or by the type of device that subscribed to your notifications. 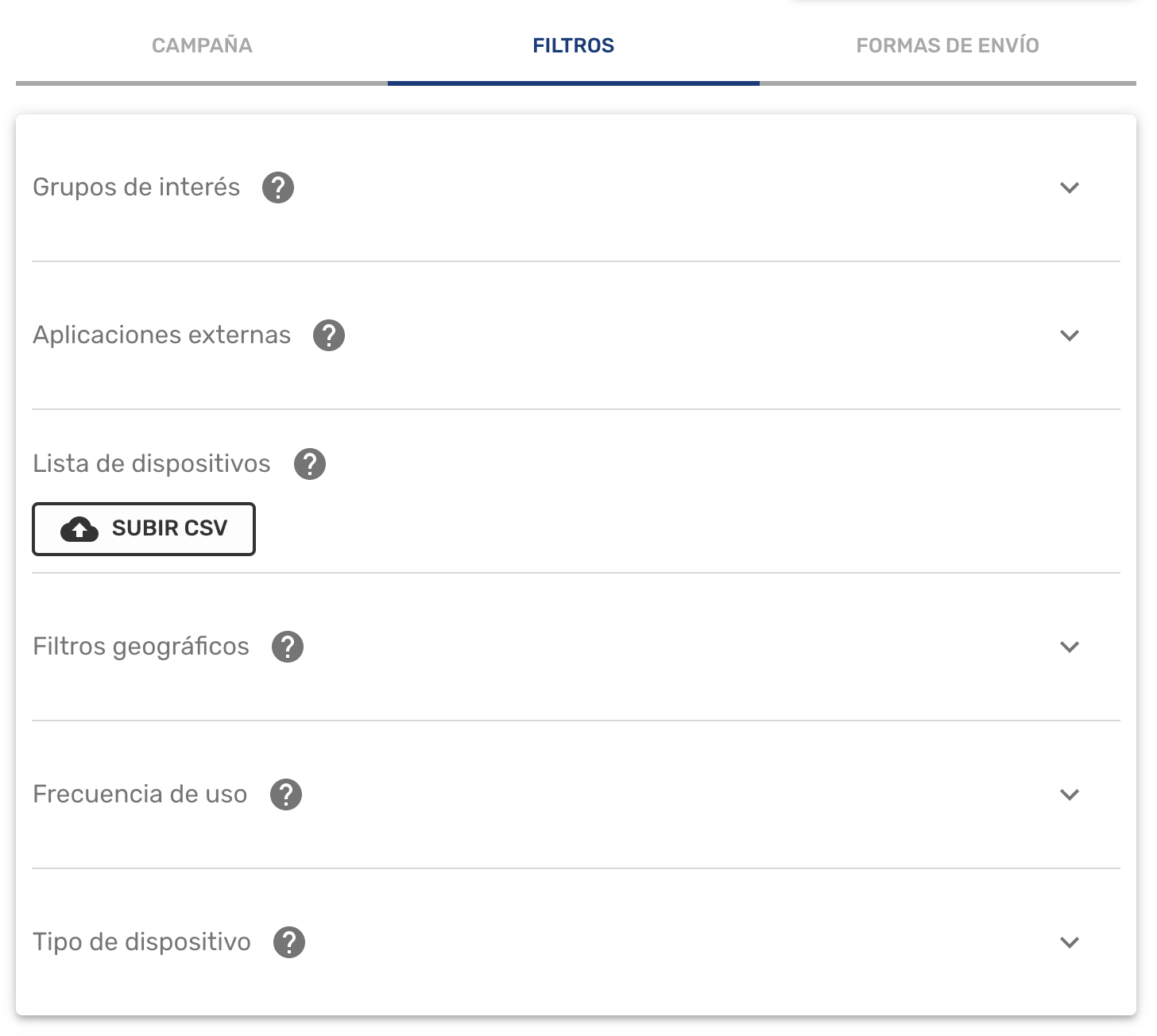 Filters affect the number of devices that will receive the final notification.

Exception:In the case of campaigns that are sent automatically, the counter will not show a result of the number of devices to which it will be sent

In the following video-tutorial we will show you how to apply these filters:

You can find detailed information about the Stakeholders tool at this link .

You can find more information about the External Applications tool at this link .

You can establish a list of device IDs, so the campaign will be sent to the list made up of these devices.

You must upload a .csv file with the word deviceld in the first line and a deviceld for each line.

Find out how to get these identifiers with this video:

You can also use your own identifiers (for example, email, user ID in your CRM, etc) to create the list in .csv. In this case, you must load the .csv file with externalId as header (first line) and your identifiers in each of the other lines.

This filter allows you to send geolocated notifications. You will send the campaign to the devices that are within the specified areas.

In this video tutorial we explain how to make shipments by selecting the areas:

This option allows you the possibility of sending the campaign to devices that have not visited the application in a certain period of time. Also to users who have done so.

When you use the device type filter, this option will allow you to select between mobile phone, tablet and desktop computer. You can also select in which browsers you want your campaign to be shown (Safari, Opera, Edge, Firefox, Chrome).

Smart shipping is a unique product from indigitall that optimizes the testing process for different versions of the same campaign using our machine learning algorithm, Smart Test .

Our algorithm will progressively and automatically send one of the versions to all devices. Depending on the success of the versions, the one with the highest conversion rate will send more users.

The longer the test lasts, the better the math model will learn and send the most successful version to more devices. Notifications will be sent in a sale of 2 to 7 days in a constant and gradual way in daytime, depending on the number of total devices and hourly filters.

By clicking on the statistics button in the section [Campaign> Push Test A / B] (https://console.indigitall.com/tools/testab), you will be able to check the notifications sent and how many have been clicked by each version and device : web, android, iOS as the total.

On the left is the detail by campaign and in the last line the total of the campaign:

On the right is the total for the campaign:

When clicking on a version, a pop-up window appears with the details for each device (web, android, iOS) and the total CTR (Click Through Rate), number of notifications clicked among those received.

Choose the one you want to send to the rest of the users. On the left is a "Submit" button.

Status of an A/B Test

Created tests can be in one of these states:

Completed - Has been sent to all devices in the campaign.

Submitted: Manual submission of all versions is complete.

In Progress : The campaign is being sent by smart sending.

Canceled : the test has been canceled.

Error : An error has occurred.

Pending : the test has been created successfully but smart submission has not started yet.